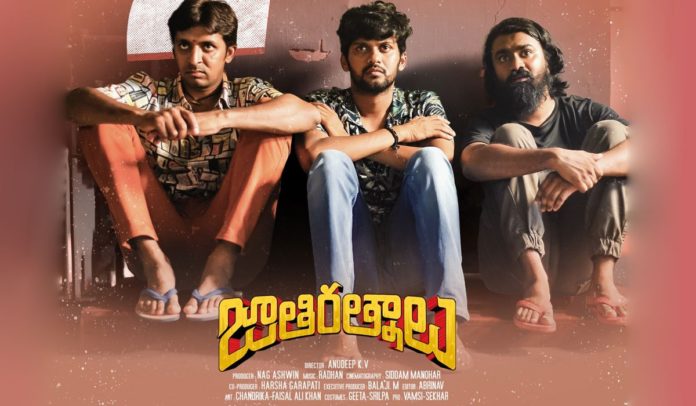 Not just the fans, but also the top leading actors of Tollywood including Mahesh Babu, Allu Arjun, Prabhas, and Vijay Deverakonda couldn’t stop gushing over the comedy entertainer. The Telugu film Jathi Ratnalu is one of the first Indian films to score big at the US box office after the pandemic. The movie’s promotions are still going and recently the makers have released the deleted scenes from the movie

Kartikeya Gummakonda latest movie Chaavu Kaburu Challaga is a romantic comedy drama movie. The movie is written and directed by Peggalapati Koushik and produced by Bunny Vasu and Allu Aravind under GA2 Pictures. The movie features Kartikeya Gummakonda and Lavanya Tripathi, Murali Sharma, Aamani, and Rajitha. The Chaavu Kaburu Challaga movie was released on 19 March 2021. The Basthi Balaraju (Kartikeya) is a van driver who carries dead bodies. One day, while transporting the dead body of a person Peter, Balaraju sees the deceased man’s wife Mallika(Lavanya Tripathi) movie and falls in love with her. In this movie, anchor turned actress Anasuya Bharadwaj will be Item song in the upcoming romantic and action movie

The teaser of Good Luck Sakhi was unveiled and garnered a lot of attention on social media. Keerthy Suresh is playing the role of Sakhi and her character brings bad luck to everyone and her fiance dies in an accident ahead of their marriage. The film is scheduled to be released theatrically on 3 June 2021.

Bangaru Bullodu is a comedy film directed by P. V.Giri from a screenplay written by Veligonda Srinivas. Produced by Sunkara Ramabrahmam and Ajay Sunkara under the banner of AK Entertainments. The film features Allari Naresh and Pooja Jhaveri in the lead roles. Bangaru Bullodu movie is released on 23 January 2021. In a pre-release event of the film, actors Allari Naresh and Pooja Jhaveri danced to the Swathilo Muthyamantha remix song.

Rang De romantic comedy film was written and directed by Venky Atluri. The Rang De movie is Produced by Suryadevara Naga Vamsi’s Sithara Entertainments, the movie stars Nithiin and Keerthy Suresh. The movie music is composed by Devi Sri Prasad. Nithiin plays the Arjun role and Keerthy Suresh played the Anu role. Arjun and Anu are neighbors and they are childhood friends. But Anu falls for Arjun but he hates her. They are forced to get married and there is a new game that starts between the husband and wife and Keerthy Suresh starts to blackmail Nithin. The movie was theatrically released on 26 March 2021.

Varudu Kaavalenu is an upcoming romantic comedy movie directed by Lakshmi Sowjanya and produced by Suryadevara Naga Vamsi under the banner of Sithara Entertainments. The movie starring Naga Shaurya and Ritu Varma in the lead roles. on the occasion of Young hero, Naga Shaurya’s birthday and Varudu Kaavalenu movie makers have Released a short glimpse of Shaurya from the movie. The 30 seconds odd video begins with Shaurya wearing a blackshirt but it showcases his six packs body. Then he picks some of the luxury items from watch to shades and suit. Finally, Shaurya flashes all decked up like a perfect gentleman.

Alludu Adhurs is an action comedy film written and directed by Santosh Srinivas and produced by Gorrela Subrahmanyam. The Alludu Adhurs movie stars Bellamkonda Sreenivas, Nabha Natesh, Anu Emmanuel, and Prakash Raj. The film was released on 14 January 2021 coinciding with Sankranthi. The movie music is given by Devi Sri Prasad.  Bellamkonda Sai playing the role of Seenu is a happy-go-lucky youngster from Hyderabad. In this movie Sonu Sood is playing the role of villain, after the lockdown, Sonu Sood has become a real hero with his philanthropic works.

Hi I'm Yuvasri, I worked as a Digital Marketing Analyst and I do On-Page, and Off-Page Optimization regularly. I'm very passionate about creating content for new films, videos, series, entertainment of different genres. I am providing content that those who are more excited about the movies to follow my blogs.